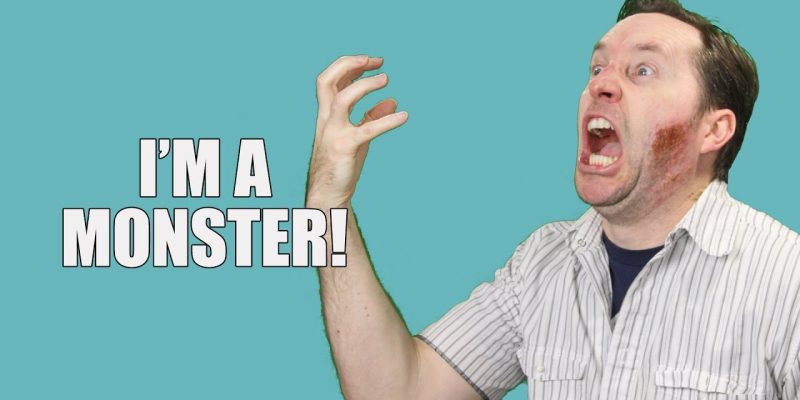 …And by that, I mean I’m sick. For that reason, there won’t be a video this Monday.

Allow me to explain.

Many of you know about the skin treatment I’ve been doing for sun damage – if you don’t remember, here’s a reminder:

At the end of this video, I mention that I need to eventually do this treatment on my forearms. Well, that’s what I’ve been doing the last month or so. None of you had to see it because I’ve been wearing long-sleeve shirts in my videos, but it’s been fairly traumatic, especially as I was finishing up the treatment last week.

The flu-like symptoms that accompany this hit me pretty hard last weekend and I’ve been running at, tops, 70% since then.

So this last week I got an outbreak of canker sores in my mouth, which is not unexpected with this treatment, so I didn’t think anything of it, except it was a pretty huge outbreak, to the point I can barely eat. And my lips have been insanely chapped. I just figured it was a strong reaction to the medicine.

Then, Thursday morning, I woke up to find weird spots all over my hands… 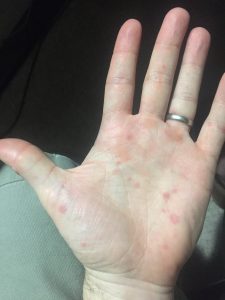 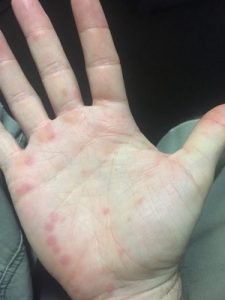 I immediately assumed it was the supplements I was taking.

Last time I visited my dermatologist, she recommended I take a couple of supplements for the sun damage and I just happened to start taking them last week as I was wrapping up the Zyclara treatment. One of the side effects was a “niacin flush” and I figured these spots were a part of that.

Considering that this flush could also be inducing the kind of inflammation that was causing the extra-nasty outbreak of canker sores, I stopped taking them and reached out to my dermatologist to see if this was an expected side effect. I sent an email. She called me immediately.

(On one hand, it sucks when you can’t get a hold of your doctor, but nothing is more worrying than when a doctor is super responsive. It’s never a good sign.)

Turns out this is not an expected side effect of the supplements that she’s ever seen. But they are symptoms of an outbreak that’s been going around. A virus called Hand, Foot, and Mouth disease.

Why is it called that? Because it causes outbreaks of sores on your hands, your feet, and your mouth. Clever.

I nervously checked the bottom of my feet and saw that, yep, I got spots there, too. Great.

It’s a virus that’s very common amongst toddlers, but anybody can get it. And since I get diseases that match my mental maturity, there we are. And because it’s a virus, there’s nothing you can really do about it but let it run its course.

It’s been especially rough the last couple of days. I barely left the couch or the bed yesterday and am basically on a smoothie diet. The symptoms come and go in waves. Sometimes I’ll feel perfectly fine, and then an hour later I can’t peel myself off the couch, my mouth hurts so much I can barely talk and my hands and feet feel like they’re covered with splinters. I rarely go to bed before midnight normally and I was in bed at 8:00 last night. And slept at least 3 hours during the day.

I’m a mess right now is what I’m saying.

One more thing about me is I don’t work through sickness. I lay my ass down and let my body focus all its energy on fighting the disease. I’d rather be flat on my back for a few days and then get back to 100% than try to push through it and drag it out for weeks and months. I know I’m lucky that I can take some time when I need to do that – I haven’t always been so lucky and there’s far too many people out there who can’t.

So, there won’t be a video out this week. It sucks. I finally had a content schedule set up and I’m going to have to push everything back. I’m spending that time (in bed) focusing on behind-the-scenes stuff like getting the podcast worked out on the website.

But I’ll be back soon. Thanks for understanding. You guys are the best.

(Unless you aren’t understanding and hold a grudge against me. In which case I’ll come over and spit in your mouth.)